Harboring one of the most diverse systems of waterways paired with one of the most unique geographical makeups in the country, Oregon sees its natural resources provide a great deal for its economy. Despite its proximity to Silicon Valley and the subsequent creation of “Silicon Forest” in the state, Oregon is still the largest producer of timber in the lower-48 states in the country and exports large quantities of agriculture and fishing-related goods. Nike sees headquarters in the state, proving to be the largest single economic source in the area. Overall, the state presents an interesting blend of the frontier lifestyle and culture and the young, gentrified and hip lifestyles purported by the youth and American counterculture.

PORTLAND TEAMS OR SOLOS THAT WANT TO TEAM! Teams for Immediate Seating or we will Team you up! $12,000 sign on bonus for each driver =...

Local Routes Available Truck Driver Benefits: Local routes available Home Weekends and Some Nights Pay: Be sure to ask a recruiter about...

Get home weekly and earn top pay with this Dry Van opportunity from Marten. Drivers average 58 CPM, so you can earn $1,000 a week or more! Get paid...

Call Today to Learn More About Our NO CASH DOWN Lease Purchase Program for Solos! Are you in it for the long haul? John Christner Trucking is. 34...

Despite it being known for its ‘tree huggers', Oregon cuts more lumber than any other state and with its manufacturing industries making it the second fastest growing economy in the entire U.S, Oregon is opening its arms to truck drivers now. From its vast forests to mountainous terrain, Oregon's natural beauty also drives its tourism industry and certainly makes it one of the most appealing places for a truck driver to enjoy earning good money as well. 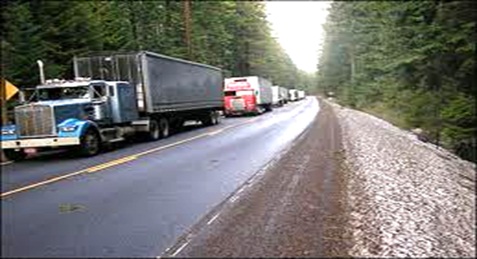 In addition to lumber, the state's rich farms, mines and fisheries supply the raw materials for its major manufacturing industries and overall economy. Oregon's huge hydroelectric developments such as the Bonneville and McNary dams provides a huge power source for the many industrial plants and powering Oregon for more economic growth into the future. With it gross domestic product growing to $186.2 billion last year and 4.7 percent higher than the previous year, Oregon more than tripled the U.S. average for economic growth and placed second of all the states.

In 2009 trucks already transported over 88 percent of the state's total manufactured tonnage, or 417, 545 tons per day and a number that has certainly grown with the economy every year since. While Oregon's proximity to major ports make the exporting of goods a major business for the trucking industry, a large percentage of its local communities depend exclusively on trucking companies to move their goods as well.

With well over 10,281 trucking companies operating throughout the state, the Oregon trucking industry was last reported to provide 94,247 jobs or one out of 15 in the entire state. According to the US Bureau of Labor Statistics, the average annual salary for the Oregon trucking industry was $44,248 and although this number is already much higher than the national average, the demand for truck drivers has driven up the earning potential even more. In addition to Oregon appealing to truck drivers through high wages and major benefits, the strength of its trucking associations also make it a truck-friendly state as well. The Oregon Trucking Association is dedicated to serving the interests of the industry providing services in many different ways such as; representation with state and federal legislature, classroom/on-line up to date training, providing the current information and services for the trucking industry.

Whether you are already there or applying from out of state, Oregon has plenty of truck driver jobs available right now and they are amongst the highest paying in the country. While the cities with the most jobs include Portland, Eugene and Salem, Oregon needs truck drivers all over the state and there are all types of positions to choose from as well. TruckDrivingJobs.com makes your job search much easier with everything you need to succeed, simply by going on-line. From our current job postings from all over the state, to our e-application process linking you to employers before anyone else, you will have a truck driving job in Oregon as soon as you decide you want it.

Below are list of companies currently hiring within oregon.

B & B Asphalt Paving Inc

Call 503-665-8383Based out of Fairview, B & B Asphalt Paving owns 669 trucks and primarily transports Building Materials, Machinery, Oversized loads such as Farm Mining or Oilfield equipment.
Call 503-665-8383

B & B Asphalt Inc