Part of the on-going legal battle in the high-profile accident that killed James McNair and critically injured celebrity comedian Tracy Morgan has finally been settled. The McNair family has been awarded $10 million from retail giant Wal-Mart as it was one of their truck drivers that slammed into the luxury van carrying McNair, Morgan and two others on the New Jersey Turnpike last June. 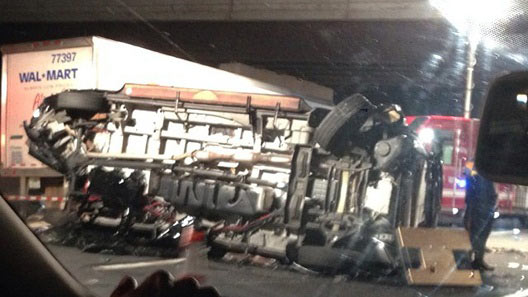 According to the McNair family attorney, Daryl Zaslow, Wal-Mart agreed to the large payout in order to avoid further potential losses from litigation. The settlement stipulates that James McNair's two children, Jamel, 26, and Denita, 19, will divide the payout after Zaslow takes his payment amounting to nearly $3 million cut. The settlement had actually been signed by both parties in October, but it wasn't announced until January and even then the terms of the settlement were not released because of a confidentiality agreement signed by both sides. Recent legal documents filed in court finally revealed the huge dollar amount and also indicated that Wal-Mart did not want the sum publicized out of fear it would potentially hurt business.

"Both Wal-Mart and the estate of James McNair feel that financial damage could result to Wal-Mart if the terms of settlement are revealed," Zaslow said in the court filing. Zaslow also revealed that securing this size of payout wasn't easy because 62-year-old James McNair didn't make nearly as much money as his famous friend Morgan and basically made his living working part-time at the Salvation Army in between his stand-up comedy and writing gigs. "He had no meaningful past income to project a significant lost-wage claim," Zaslow revealed in the filing. "Although many of my colleagues insisted that the strategy would not be successful, and for many months of negotiations this assessment of damages was not being entertained by counsel for Wal-Mart, through months of heated negotiations, I was able to convince Wal-Mart to view the damages through this rather unorthodox approach," Zaslow also said in his filing.

Randy Hargrove, spokesman for Wal-Mart spokesman did not want to discuss the terms and conditions of the settlement but issued the following statement. "We deeply regret the loss of Mr. McNair as a result of the accident, but Walmart worked closely with his family to ensure their well-being. Wal-Mart will continue to work to conclude all other remaining issues, and we’re committed to doing what’s right."

The next big hurdle for Wal-Mart is to settle with Tracy Morgan who suffered a brain injury in the crash and has basically had to put his highly successful career on a long hold. The former star of "Saturday Night Live" and “30 Rock,” is currently suing Wal-Mart for an undisclosed amount. “Tracy is working very hard to get better, physically, emotionally and mentally,” said Morgan’s attorney, Benedict Morelli. The two other passengers who were injured in the crash also have a separate lawsuit against Wal-Mart.

While the Wal-Mart truck driver, Kevin Roper, has not been named in the Wal-Mart lawsuits, he is facing criminal charges that include death by auto and others. He has not yet been indicted and his attorneys are continuing to ask the court to hold off until the civil suits against Wal-Mart have been settled.