Another prime example of why truck drivers need to always be aware of the dangers of being alone on the road. Early Thursday morning a Groendyke fuel truck driver was shot and killed outside of a convenience store in Fort Worth while simply doing his job. The tragic event has hit the company’s employees hard and they are devastated by his loss.

While his name has not yet been released, a spokesperson for Groendyke said that the driver was in his late 20s and had been working the overnight shift for about a year. “Our thoughts and prayers go out to the loved ones involved, including friends and family of our driver. We are shocked and saddened by the tragedy. Our driver had an excellent safety and work record for Groendyke. He will be missed.” Greg Hodgen, the company president also added, “Just devastating to go through something like this.”

The incident took place at a QuikTrip located on Bryant Irvin Road, in the southwestern part of Fort Worth, Texas. While it is still undetermined what exactly occurred, investigators say that the Groendyke fuel truck arrived at the store at about 1:30 a.m. Thursday morning and the driver had started unloading the fuel. Homicide detectives weren’t called to the scene until around 4:00 a.m. and aren’t yet sure exactly what time the shooting occurred, but they believe at some point before 2:30 a.m. the driver was shot while in the cab of his truck. Detectives found at least two bullets had hit the windshield. Interestingly enough the store had been open at the time of the shooting and people were even inside, but the store employees told police they didn’t see or hear anything out of the ordinary. It wasn’t until they came out to check on the truck driver that they found him dead and called the police. 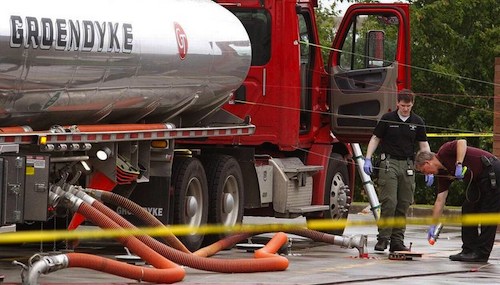 Detectives say that they are still reviewing surveillance camera footage to see if they can find any further clues as to how and why this shooting occurred. “We know that it was a gunshot wound, so they’re going to be searching for shell casings, things of that nature, so it’s going to be wide to see if there’s any evidence in the area,” said Tracey Knight of the Fort Worth Police Department

Groendyke’s president says that they tell their employees not to unload fuel if they don’t feel safe and that this was likely an unnecessary, random act of violence. The company also says that the driver was only in his 20’s and was an exemplary employee who was popular with his co-workers. “They said he always had a smile on his face, a hard-worker, strong work ethic.”