In many ways an innovator within the industry, C.R. England is still highly categorized as a traditional trucking company. To this end, C.R. England’s mode in which they conduct business as well as the atmosphere they provide for their drivers may be orthodox, but the means in which drives are rewarded and paid is certainly a modernistic stance.

A Modern Paycheck at C.R. England

With nearly constant openings for drivers at the company, C.R. England seemingly never falls short in promoting opportunities that can financially benefit drivers. At a base level of compensation, a company driver at C.R. England frequently sees a salary of $36,191 per year.

C.R. England has long understood the best practices and incentives in which to recruit drivers and how to keep with up with the industry standards of what drivers need to feel valued and appreciated. In order to meet these needs, C.R. England has provided the economic incentives competitive with other large trucking companies recruiting a wide array of drivers.

C.R. England is also known to promote a great deal of extra bonuses on the road, including frequent bonuses per mile depending on one’s route and whether or not they are a solo driver versus a C.R. England team unit. No matter what one’s driving position is at C.R. England, they are guaranteed to find an excellent paycheck.

Although C.R. England has made a name as one of the largest temperature controlled carriers in North America, it is not strictly reserved to finding itself as a reefer carrier, as it were. C.R. England sees routes across the country that fall into the dedicated, regional, national, intermodal and local driving positions to fulfill clients needs alongside healthy pay for drivers in regards to their help in this client fulfillment.

As reported by C.R. England drivers, some of the most lucrative routes in which they have found great pay are the following:

Local Routes:Drivers working C.R. England’s newly revamped local routes will not only see exceptional home time, but have the potential to earn a median salary of $45,973 per year. With the flexible shifts provided by local routes at the company, C.R. England has crafted a highly competitive pay package for these runs.

Regional Driver: Seeing growth as perhaps one of C.R. England’s largest divisions, regional drivers are slowly yet surely becoming one of the company’s flagship “lifeblood” divisions. With that importance in mind, many truckers working regional runs have seen close to $63,211 per year. Regional runs have some of the best pay at C.R. England as well as one of the most amenable home time schedules the company has to offer. Regional runs can also present some interesting and challenging day-to-day routines, with a vast array of different conditions and routes for a driver to take on. 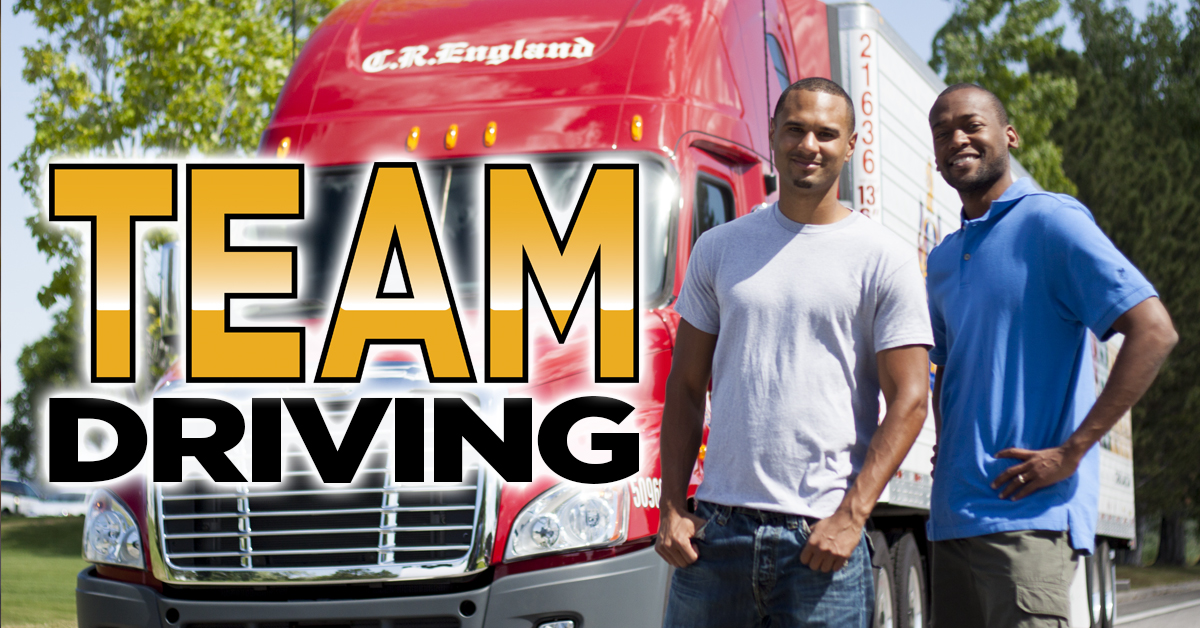 Though all drivers at C.R. England are treated with the utmost importance and respect, the team model has often seen an important role within the infrastructure of the company.

The intrinsic value of teams at the company can be found in the simple equation that two drivers allow for more miles to be taken on. Teams are among the special divisions at C.R. England that will see bonus pay for safety as well as a fuel savings and other positive behavior that benefits the company.

In addition to bonuses, the company has ensured that experience in this division truly counts for something. Drivers who join teams at C.R. England can benefit from a pay scale that is graduated to pay for experience – the more years one has on the road, the greater chance they have to earn more alongside their partner.

Widely known as one of the first major trucking companies to adopt technology across the board, C.R. England has long understood the value of implementing technology in order to further company practices.

Introducing Qualcomm early on was a major enhancement in regards to C.R. England’s overall practices, but the use of helpful and customer-intuitive technology has certainly not stopped there – nor has cased in helping drivers complete more efficient and customer-sensitive runs.

C.R. England drivers are not overly reliant on the technology that the company asks them to utilize, however. Instead they often find that using the tools provided to them from C.R. England helps the entirety of the trucking fleet become more interconnected and therefore become a more trucking-proficient team altogether. This greater sense of proficiency can continually help in bolstering the company’s overall status in the trucking industry, spelling out a potential for greater pay overall.

C.R. England may not necessarily be the most economically-centric-driven carrier in terms of inundating their drivers with promises of wealth untold and huge monetary benefits, but perhaps they do not need to do so given the overall atmosphere at C.R. England.

The longevity and success of the carrier over the course of almost a decade speaks for itself in many respects, as do the ever-growing fleet of drivers that join C.R. England’s various fleets. There’s a reason C.R. England finds itself continually growing – as it continually provides the resources for driver success at the company.

Take nearly any lane, service, or driver combination at the company and one will find bonuses embedded in them that give a driver direct pay bumps or some sort of implanted perk wherein drivers have seen continued success.